Each year, the Alberni Valley Hospice Society has to work hard to raise the funds needed to operate all its programs, including its flagship palliative care facility, Ty Watson House. Because of the unique model that Ty Watson House is, operated entirely by the A.V. Hospice Society, with the medical needs at the house being delivered by Vancouver Island Health Authority, the onus is on the Hospice Society to raise about $500,000 annually just to keep the house and all the other Hospice Programs running. While few grants are available for operating costs, even fewer are available for Palliative care. The bulk of the funding for Ty Watson House must be provided through other fundraising methods, relying heavily on community support. One of the most critical of the major fundraising events is the annual Black Ty Gala. This is the story of how the Black Ty Gala began, how it has been sustained, and how it will continue on into the future.

In 2008, just as Ty Watson House was opening its doors, Linda Bowers, the then owner of Boutique Belles Amis, hosted a fashion show at the Casino from which money was donated to the AV Hospice Society. It was a lovely evening out on the town! Attending the fashion show were two other creative business people of our community, Deb Pearson, who owned Deb’s Fashions at the time and Don Ferster, who owns Jim’s Clothes Closet. Don and Deb got talking, bouncing ideas off each other.

“Wouldn’t it be great to have a night out on the town every year? We could go big and we could give people a unique experience that they just don’t get anymore in Port Alberni. We could create the party of the year for Port Alberni in which people could have a great time while they raised money for Hospice. If we had a formal dinner and dance, Port Alberni people would come out for it like they did back in the days of the annual Beaux Arts Balls, the Policeman Balls and the Fireman Balls.”

Thus a new Hospice tradition was born. The Black Ty Gala, just as Deb and Don envisioned, has become the place to be each spring where you can get dressed up in your finest outfit, wear your brightest bling and have a grand time while participating in various exhilarating fundraising events throughout the evening.

At the time of their discussion, Deb was on the fundraising committee for the A.V. Hospice Society, working on various projects to raise funds specifically for the newly opened Ty Watson House under the executive administrative leadership of Lynn Turner. When Deb and Don started talking about the idea of an annual celebration, Don joined the team and they have co-chaired a sub-committee devoted entirely to the planning and execution of the Black Ty Gala ever since.

For Don, the decision to join the committee was an easy one. Even in its earliest stages, he could see that Ty Watson House was a huge asset to Port Alberni - one that each and every citizen may potentially use regardless of their circumstances, their age, or their financial resources. He, along with Deb, also saw that there was a great need to create awareness of this significant new community asset.

For Deb, her interest in Hospice grew when she lost a dear family member to cancer. Deb’s family had cared for their loved one at home and Deb realized the great need for a facility for end-of-life care. She was also aware of the ten-year, achingly arduous crusade that Lynn Turner had been on to bring Ty Watson House to fruition and she wanted to support Lynn and the Hospice Society in any way that she could.

For both Don and Deb and their committee of ten, the evening was to be not only one of elegance for a great cause, but it was always to be fun! Starting their planning every September for the April or May event, the committee is tasked each year to be more and more creative. Some members, such as Jan Cole and Linda Bowers have been with the committee since its inception, bringing that much needed continuity to bear. Other long-term members of the committee, Jennifer Colette, Linda Taylor and Jill Reynolds have brought their expertise to the table for many years. Committed Hospice Staff members also make a critical contribution. Teresa Ludvigson, the new Executive Director for the AV Hospice Society, brings her inspirational energy to the group. But both Deb and Don say that everyone on the committee would agree that nothing could transpire without the boundless energy, efficiency and creativity of Blair Knoedler, the Administrative Assistant for the Alberni Valley Hospice Society. Finally, on the day of the event, a small army of volunteers shows up to help transform a large multi-purpose room into a fantasy get-away. 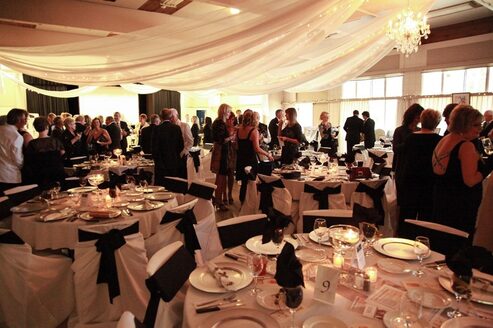 The first Black Ty Gala was held at Echo Centre, where two hundred guests could be accommodated, a catered multi-course dinner was served from the large kitchen by servers in dapper formal attire and the tables were later cleared for dancing the night away. Echo continued to be the place to be until 2019, when the Gala was moved to the Italian Hall because of a conflict in dates for Echo Centre.

The intent was to have the Gala at the Italian Hall - generously donated by the Cardinal family - again in 2020, until COVID-19 brought everything to a severe and unexpected halt, a mere few weeks before the Gala was to take place. Intent on making the Gala bigger and better each year, the evening of madcap capers was in the very final stages of planning in early March 2020. Indeed, all was essentially done and the tickets had just been printed, when a state of emergency in the health of BC was called on March 17, 2020. For the Black Ty Gala committee and for the AV Hospice Society, the timing couldn’t have been worse as all the annual local fundraising for Hospice runs between March and November.

Everyone is hoping beyond hope that the Gala can resume in the spring of 2021 but as every citizen of the world knows, that is a great unknown at this point. In the meantime, the Black Ty Gala team has their collective thinking cap on to plan an alternative fundraiser that is also fun and fabulous. The committee is very aware, though, that the coronavirus has been challenging for everyone so it is difficult to ask people to step up the way they have done in the past. Planning is difficult, too, when the news of the virus changes from month to month. Nonetheless, Don and Deb, the keepers of the Black Ty Gala dream, will hold on to their vision for when it can resume. From that very first Gala twelve years ago, a pattern developed to realize the dream that has become the trade-mark of the Gala and it will continue thus once the Health Authorities deem it safe to do so. 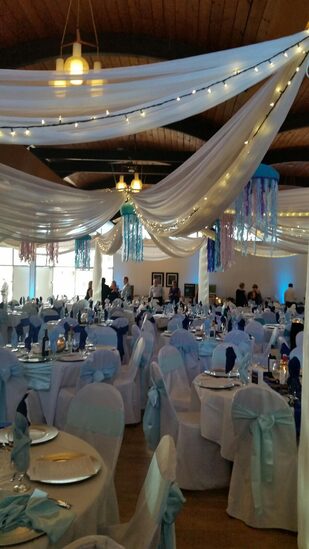 So what happens when you attend a Black Ty Gala? Well, a most important consideration for each guess attending is that year’s theme, conceived way back in September by the committee. Themes such as “James Bond”, “The Oscars” and “Under the Sea”, to name just a few, determine what many guest are going to wear. On one of the James Bond evenings, there were three James Bonds in the room and funds were raised as guests tried to guess which one was the “real” James Bond. Many tickets for guesses were sold as guests sipped on their martinis—shaken, not stirred.

Following the theme, the well-coifed enter to an always breath-takingly decorated room, done by Sharon Herbert of Fantastic Events. As the guests mingle in the hour before dinner, a silent auction is available as the first step to the donations that will be vied for throughout the evening. Generous artists, artisans, business people and private patrons donate significant items for the silent auction each year. Then the call is made for all to take their seats for the catered, often plated dinner, organized by different caterers over the years. In the early days, it was Dave’s Catering and in the latter years it has been Chef Brad DeClercq from Starboard Grill. Once an always-stunning dessert is served, an inspirational guest speaker addresses the seated audience, bringing a greater understanding of just what Hospice entails as they share heart-felt experiences with Hospice and, specifically, with Ty Watson House.

Over the course of the evening various ways to donate unfold. Some years an impromptu auction has determined which first three tables would be served their dinner. But always, after dinner, a live auction is held on large ticket items, often to the amusement of the audience as it is called by an experienced auctioneer. Generally, a couple of raffles are drawn at different points in the evening. The raffles, with their big ticket items such as Westjet tickets or a piece of Gordon Dick hand-crafted silver jewelry, is always appealing. All is done with a great sense of fun! All is done is a spirit of gaiety and excitement. All is done to get those dollars flowing liberally for a most meaningful cause. And flow they have.

Music is an important part of the evening. During the cocktail hour, the Harbour City Big Band, under the direction of Sarah Falls, donates its talent and time to create a special ambience. 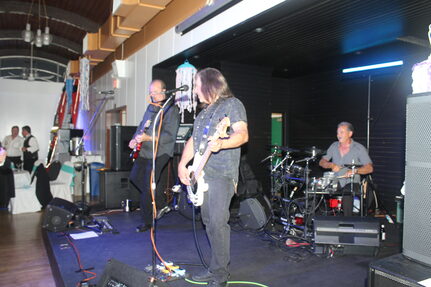 Then the evening is always capped off with a dance as people glide around the dance floor in their finery. For many years canned music was donated but last year, with the move to the Italian Hall, a live band played, with the musicians' fee generously covered by a Gala patron. For many, it is the dance that makes the evening such a complete success as so few opportunities exist in the community for folks to get dressed up, eat fine food and then dance their hearts out. And for those who wish to imbibe, a fare-free cab ride home makes the evening safe as well as fun!

As Deb and Don explain, this event can only be the success that it is in this Community with a Heart. The donations, the time given and the heartfelt, spirited fervor of all involved from volunteers, staff, donors, patrons and participants, is the hallmark of Port Alberni, the Community with a Heart!