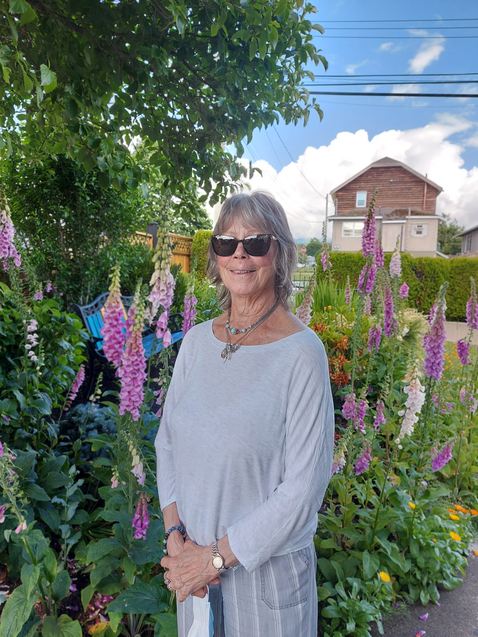 Recently we had the chance to sit down with Jane Thompson and pick her brain about her experience volunteering with AVHS.

Jane is originally from Montreal and moved to BC in 2014. "My children have lived in BC since '96, and when my son had his first baby, I decided to move to the island. I lived in Victoria for a year before moving to Port Alberni."

Jane is a yoga enthusiast and enjoys daily mediation. Jane has always been active within her communities. Jane has volunteered with Meals on Wheels, hospitals, and women's shelters. Locally she has also volunteered as a board member for ACAWS and at New Horizons, where Jane volunteered for four years teaching chair yoga.

Jane said her first impression of AVHS was that it "is a wonderful, well-organized organization." Jane is a returning volunteer who took a break between 2017-2020. Jane has three permanent weekly shifts at Ty Watson House. Jane said, "it gives me an outing and social interactions while doing something worthwhile for the community." Jane let us know that being an active part of her community is very important to her, saying, "I continue to volunteer because it gives me a sense of community, not only with other volunteers but with those that come to Ty Watson House. You build a personal rapport with residents, visitors, and community members coming to make donations. We have such a benevolent community here in the valley."

In her spare time, Jane also likes to turn on some '60s and 70's Disco and Rock and Roll, and have a dance party in her living room. Jane spoke of her move to the Alberni Valley, saying, "I remember doing my daily meditation and something or someone said, Port Alberni and following my guidance in my meditation, I was here in Port two weeks later. " Jane says she enjoys the landscape and scenery the valley has to offer.

Jane fondly remembers AVHS hosting Christmas dinners at Ty Watson House and was very impressed at the spread put together by Gail Koehle. Jane mentioned that she learned that "people are generously congenial and are ready to help however they can. Even the people working and volunteering with AVHS aren't just there because it's a job. They want to be here to help. During my time volunteering here, I have learned that I am very adaptable."

We asked Jane to tell us what she would say to encourage her community to come out and volunteer. She replied, "You're doing a great job for the community. You will create a personal sense of belonging within your community." Jane had this to say when ending the interview, "It's a joy ride. Every day is different, people coming and going, bringing donations, and visiting their loved ones. You never know what is going to happen that day."

Thank you to Jane for sitting down to share her experience with us, and thank you to all our volunteers for helping us deliver services to this fantastic community and surrounding areas!