The genesis of Ty Watson House seeded in the mind of Lynn Turner some fourteen years ago. Lynne had cared for a dying friend in her home for several weeks but it was the when another friend lay dying in the hospital with little support except a daily visit from Lynn and the care of worked-off-their-feet nurses that motivated Lynn to action. One night she woke with a compelling thought, “Wouldn’t it be wonderful if there were an old house--a real home--where people could go when they are dying? They’d have people dedicated to their care and their family would have support.”

Shortly, thereafter, she learned that the Continuing Care Society had acquired the old house on the corner of Second and Stirling. Walking by at twilight one night Lynn, intrigued by what she saw from the outside, arranged get a tour of the insides. She immediately got excited, “Oh my gosh! With work, this could be a fabulous kitchen! The five upstairs bedrooms would be perfect for residents--the hallways are wide for moving beds and wheelchairs! The basement level would make a perfect office!”

Most anyone else looking at the old home could not possibly see why she was so excited. How would you move residents from the third floor to the second floor kitchen? Where would you bathe people in that tiny bathroom? There is no connection from the basement to the other two floors. It would take hundreds of thousands of dollars to even begin to make this operational. Who would pay for the staff?

The more Lynn heard the tough questions, the more she was spurred to find answers. She looks back now and muses that many must have thought her delusional at best. Those who knew Lynn at the time can attest that at certain periods in the long struggle, Lynn, indeed, was the only one fighting the cause. But they also can attest to the fact that she was not one to ever give up when she had a fight on her hands.

Within months, Lynn became a member of a newly created Ty Watson House Board of Directors and was elected president. An official campaign began to convert the old house to Hospice readiness. The vision needed to be shared to entice more stakeholders. Word had to get out into the community. Letter-writing campaigns were organized. Fundraising drives were conceived. Lobbying at various government levels became a nearly full-time job. Still, many doubted that this could be any more than a pipe-dream.

“There were so many times when it would have been easy to give up,” Lynn confesses. “But just when things looked really grim, someone would press twenty dollars into my hand and urge me to carry on the fight. Or someone would say how they wished that such a place had existed for their loved one who had just passed away. You would not believe how important those seemingly small gestures were throughout the whole process!”

Meetings with VIHA became a regular routine. Often the Board left the meetings feeling encouraged that they were being heard but little was actually ever sanctioned. Tsunamis of frustration followed waves of hope.

Slowly, word spread. More and more people committed to the vision, helping in various ways. Eventually two very critical people were summoned to the cause. While Lynn worked in the office of Lunney, our Conservative MP, she managed to talk to Scott Fraser, our NDP MLA. Scott heard the whole story about the dream for Ty Watson House. He heard the details about the value of palliative care. He got excited! Lynn couldn’t believe it--a provincial politician who really seemed to hear the story and could think beyond a bottom line. Lynn, the Ty Watson House Board of Directors and Scott Fraser became a team. Soon things began to happen and talks with VIHA took on a renewed hope. Some major stumbling blocks continued, however.

Finally, it was the collaboration with one very courageous individual that really put things on the road to success. Maria Castiglione, a long-time supporter of Ty Watson House, had bravely written a public diary published by the AV Times about her journey with terminal cancer. She asked how she might help. Lynn replied, “Would you be willing to go to Victoria and talk to the Minister of Health?”

Maria’s only question: “How soon can we go?”

“I’ll never forget it as long as I live,” Lynn says with a smile of fond remembrance. “Maria was dressed in a beautiful red suit and her blonde hair was all done up. She, her very articulate son, Chris, and Scott Fraser went down to Victoria to deliver a letter to George Abbot.  He was not there but they secured an arrangement to meet with him in the near future. Global and CTV held a press conference with Maria that day and she shone! Sadly, she lost her valiant battle with cancer only two weeks later.”

In the meantime, CBC took up the story and invited Lynn to do a radio interview with them. This was the level of public exposure needed to move mountains. With the Minister of Health’s endorsement and the public exposure of the cause, the next meeting with VIHA was different. Their first question: “How do we make this happen?”

Bathed in a new creative spirit of collaboration, VIHA and the Hospice Society (having moved into Ty Watson House some time before) joined forces to create a one-of-a kind model for hospice care in B.C: VIHA provides the nursing staff and the AV Hospice Society operates the House. Lynn was hired as the first Executive Director of the Hospice Society, bringing her ten years of volunteer wisdom to the operation of the House.

Lynn’s long-held dream of a caring home for those embarking on their final journey is now a highly respected reality in the Alberni Valley community and, in her well-deserved retirement, we owe her our deepest thanks. 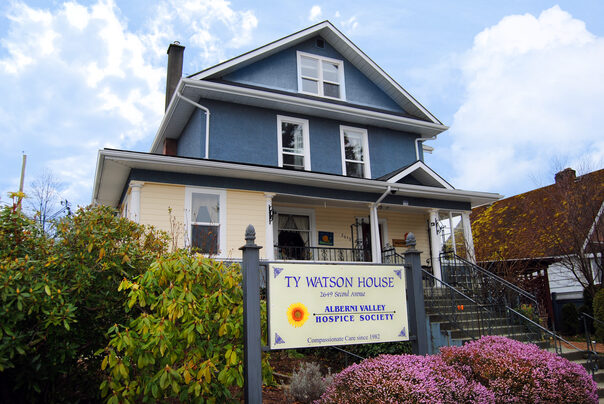